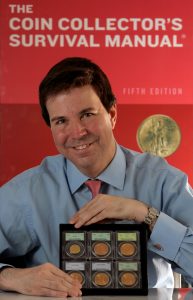 All of them have won awards from the prestigious Numismatic Literary Guild (NLG). In 2002, NLG awarded him its highest honor, the lifetime achievement Clemy. He was elected vice president (1997-1999) of the American Numismatic Association (ANA), a Congressionally-chartered nonprofit educational organization, which awarded him its Presidential Award in 2003. In 2016, ANA in partnership with NLG and the American Numismatic Society named him recipient of the Burnett Anderson Memorial Award for excellence in numismatic writing. He is the executive editor of COINage magazine, executive mediator for the Numismatic Consumer Alliance, has written hundreds of newspaper and magazine articles, conducted numerous symposiums at coin shows and other public forums, and served as a coin valuation consultant to the Federal Trade Commission. The Official Guide to Coin Grading and Counterfeit Detection was edited by Scott A. Travers. His opinions as an expert are often sought by publications such as Barron’s, Business Week, and The Wall Street Journal. A frequent guest on national television (NBC’s Today, ABC World News Tonight, Inside Edition, CNBC, MSNBC and FOX), radio programs and trade video features, Scott Travers has won awards and gained an impressive reputation not only as a coin expert but also as a forceful consumer advocate for the coin-buying public. He serves as numismatic advisor to a number of major investment funds and has coordinated the liquidation of numerous important coin collections. His online blog, The Money Connoisseur, from Bottom Line, won two NLG awards. The New York Times called Scott Travers “the Ralph Nader of the numismatic world,” and Newsweek called him “the collector’s best friend.” He is president and member of Scott Travers Rare Coin Galleries, LLC, in New York.

The gold standard for coin information.®